short hair, i do care.

Yesterday I cut inches from my hair. Or rather a stylist did, she by the name of Annette who maintains a chair at a salon in my hometown.

Yes, this is going to be a blog post about hair.

Forgive me, father, but it’s been nearly three years since my last radical haircut. Prior to that, approximately fifteen years had passed. I’m one of those people who has basically maintained the same hairstyle since she was in her mid-twenties—which is when I grew my hair longer than it had been since I was in the 4th grade and (this is most important) “embraced my inner curl.”

I’d venture to say that those of you in the “Curly Girl” community know exactly what I’m talking about. Depending on our eras, we all have our icons; for me, there was Twiggy, Karen Carpenter, Marcia Brady, Dorothy Hamill, Farah Fawcett, and so on and so on, (straight-haired girls, or girls who had someone in their lives who could whip their less than straight hair into beautiful submission). Those were the faces I wanted to see in my mirror; those were the hairstyles I tried to achieve. Until finally, almost to my third decade, my curling iron and blow dryer and hairbrush cast aside, there was simply me—me looking at me, emotionally teeter-tottering between resigned and satisfied.

I’m not in my mid-twenties anymore. In fact, I’ve decided to stop coloring my hair and let it go to whatever shade of gray it wants. With longish hair, this is not a fun process. This is not a fun process with any length of hair, but with longish hair, I was losing it. Basically, I looked like a skunk, only in reverse. So I said, “Off with her head! I mean, hair!” And there it went, brown-fried-to-blond curls at my feet, my ears and neck exposed to the elements, my load lightened.

I am not my hair. In case you (or I) was wondering.

I am also not this last political election, but damn if it hasn’t been occupying my mind and heart, gutting my mood for nearly a month now. In fact, I was tearing my hair out, worrying locks as I read article after article that registered within in me despair, fear, anger, shock, shame . . . in various combination and sometimes all at once. And then there were the Facebook exchanges. It was enough to turn my hair gray, though sadly not at any greater speed. That would have been nice, but no, I remained the same skunk I was before the election. It was only every other part of me that felt older, aged even, unsure I had the energy or wherewithal to face the next four years.

These last weeks have also taken a big toll on my writing. I was plugging along, generating words, dallying with NaNoWriMo. A friend and I spoke of 1600 words a day! A good portion of a novel in a month! And then the election results poured in and my writing ground to a halt. In an effort to stop weeping, I kept reading what Toni Morrison and other demigods and broken but visionary humans had to say about it all; including this quote by Morrison: “This is precisely the time when artists go to work. There is no time for despair, no place for self-pity, no need for silence, no room for fear. We speak, we write, we do language. This is how civilizations heal.” But yes, Virginia, I am no Toni Morrison. So though I’ve been able to cherish her words, I’ve not been able to apply them. In fact, I’ve been doubting my work. I’ve written my heart out, and to what end? What kind of writer am I, really? Who do I want to be now? Do I have that ability? These are the kind of questions I’ve been asking.

I can’t decide whether these questions are necessary or death. It’s a bit of a problem.

When I was a little girl my Saturday afternoons were spent at the hair salon with my mother. Beauty by Bart was the name of the salon, and the person who styled my mother’s hair was Bart himself, a man with slicked back hair as unnaturally black as shoe polish, and whose uniform was comprised of black pants and glossy shoes and a polyester shirt that for some reason reminded me of something from Star Trek or the Jetsons, only with short sleeves. Bart was a quiet, straight-faced man, a man of flat-effect with a lot of power. Or that’s how he seemed to me. My working mother dedicated two hours of her life to him every Saturday. She sat still for him, moved in a cloud of hair spray because of him, and because of him donned plastic scarves to ward off rain and hair nets to go to bed.

Oh, the hours I spent watching Bart shape the hair of my mother and so many other ladies into veritable crowns on their heads. The little carts with all the pins and curlers and slips of paper. The odors, noxious and overpowering that left me a little dizzy. The tips of everyone’s ears, so pink and tender upon emerging from the dryer. The tips of their noses too. And their necks (of all variety, skinny, wrinkled, wattled, double-chinned, swan-like) turned strawberry red. When I wasn’t watching Bart at work and the women he worked on and the subtleties of my mother’s expressions and moods, I was reading. I read lots of Nancy Drew at Bart’s. I read the Happy Hollisters, the Bobbsey Twins. I moved on to Jane Eyre and My Antonia. And then I dipped into the magazines—Cosmopolitan on the sly. Oh, I learned some things then.

The strange thing was that while my mother made sure her hair was completely mastered, my hair completely mastered her. We fought over my hair as my mother tried to drag combs and brushes through the mess of curls. My hair was a “rat’s nest,” snarled,” “all knotted up.” When it was good, it was very very good–I was Shirley Temple. But when it was bad, it was horrid.

It was Bart who finally cut it all off when I was in the fourth grade. It was one of those grim, gray February days that inevitably graces the Chicagoland area. I wasn’t prepared for what was to come. One minute it was long, the next minute it was gone. I thought of my auburn-haired Crissy doll, my blond Velvet. But unlike them I didn’t have a plastic knob implanted in my back to magically turn and grow my hair long again. At school on Monday, the boys called me Kojak. That and Telly Savalas were my nicknames for the rest of that long spring. If I disliked my hair before, I loathed it now.

Why am I writing all this? I’m getting older. This election has aged me. My mother is long dead. This is the year in which I outlived my mother. I had high hopes for 2016. I am grateful for every day. I want to stop time. I want to rush time. This is the only thing I can write right now. I am writing my way back to reality; this is the way I can do it.

I’ve always wondered what Rapunzel did after she got out of the tower. “Rapunzel,” I want to say to her. “You are not your hair. You are not the father who stole food for you—greens from the neighboring garden—or the mother who was so filled with hunger and desire that he had to steal more, or the wicked witch-queen who locked you up for your parents’ mistakes, or the prince who helped get you the hell out of there, or the strangeness of the new world you have to face in the aftermath of all your history. I hope you look at yourself in the mirror, Rapunzel, and say, ‘This is who I am now.’ I hope you cut your goddam hair and get on with your life, Toni Morrison inscribed on the tablets of your heart, a pen like a sword in your hand.” 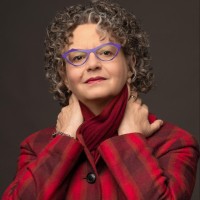 short hair, i do care.